Learning how a transmit filter works

The first practical circuit you build in The Electronics of Radio is a transmit filter. By practical, I mean the kind of circuit you could pull out of one design and drop into another. Something that fits in a black box. Here’s what the transmit filter in the NorCal 40A transceiver looks like. 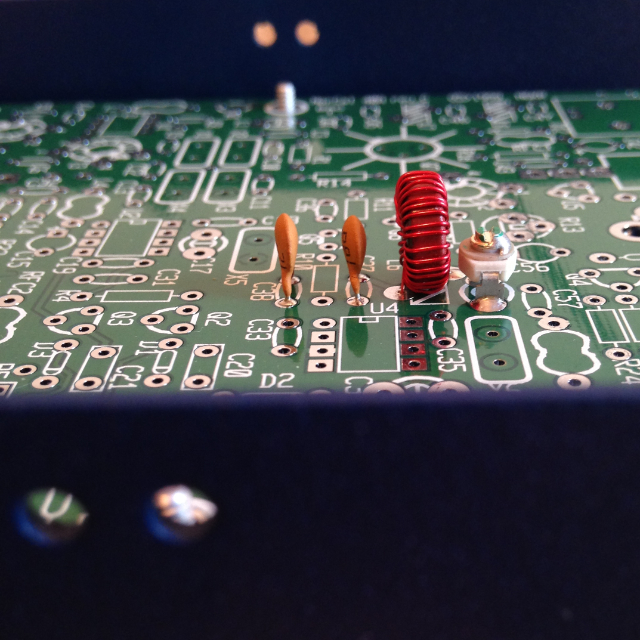 What’s a filter for?

The frequency the oscillator resonates at determines the frequency the transmitter broadcasts on. Most oscillators are made of quartz, which provides nice stable frequencies when you excite it with electrons. The problem with quartz is that it’s so stable, it doesn’t give you much tuning range. If your oscillator is a 7.114 MHz quartz crystal, you’re pretty much stuck transmitting on 7.114 MHz. Some radios, like the Rockmite II, are designed to be “rock bound” and operate on just one frequency.

The crystal oscillator in the NorCal 40A operates at 4.9150 MHz. This is known as the local oscillator or LO. Since 4.9 MHz isn’t in the 40 meter amateur radio band, we need to mix in a second signal to get things into the 7 MHz range. By making that second signal tunable, we can allow the radio to transmit over a range of frequencies.

That second signal comes from the variable frequency oscillator or VFO. The one in the NorCal 40A operates at 2.105 MHz. It’s got a bandwidth of about 40 kHz, which means you can tune it up or down by 20 kHz on either side. Mixing the LO’s 4.9 MHz signal with the VFO’s 2.1 MHz signal gives us the variable 7 MHz signal we want.

Signal mixing is known as heterodyning, and like most things that sound like they herald the dawn of Skynet, it has a down side. Not only does mixing signals get you their product, it gets you their difference as well. So we get the 7 MHz signal we want, but we also get a 2.8 MHz signal we don’t want. And that’s where the transmit filter comes in. Filters are used to remove unwanted signals.

You can make the worlds smallest filter by putting a capacitor and an inductor in parallel. This is known as an LC circuit, or a tuned circuit, and it stores electrical energy through oscillation.

The tuned circuit in the transmit filter of the NorCal 40A has a 100 pF capacitor, a 50 pF capacitor, and a 3.14 uH inductor. Because the two capacitors are in parallel, we can sum their values and pretend we’re working with a 150 pF capacitor. By plugging these values into the formula for resonate frequency, we can figure out where the circuit peaks.

The peak of the filter lands just past the edge of the 40 meter band at 7.33 MHz. That’s good because it means the 7 MHz signal generated by the mixer will pass through the filter. But what about the 2.8 MHz signal we don’t want? How well does this filter remove that unwanted signal? To answer that, we have to look at the filter’s transmission loss.

We know what the input frequency to our filter is, it’s 2.8 MHz. We can convert hertz to radians per second by multiplying by two pi.

Note that I’m being a little fast and loose with my notation here. Scientific e notation is usually reserved for calculators and programming languages, but I wanted to fit everything on one line.

Crunching through those numbers, we find our filter has a transmission loss of 0.0431 volts at 2.8 MHz. Transmission loss is usually expressed in decibels, which are a logarithmic scale where minus three decibels corresponds to a loss of half the voltage. We can convert volts to decibels by taking the base ten logarithm of the voltage and multiplying by twenty.

Here’s a chart of our filter’s transmission loss for frequencies between 1 MHz and 15 MHz.

See the vertical line at 2.8 MHz and the horizontal line at -40 dB? We want our filter’s transmission loss curve to fall below that intersection point, because that will put the 2.8 MHz signal we don’t want in our filter’s stop band.

To fix our filter, we need to add about 13 dB of cut off at 2.8 MHz to push it into the stop band. One way to get more loss out of filter is to stick several of them together in series. We know that capacitors block low-frequency signals, so we can stick a capacitor in series with our band-pass circuit and use that as an additional level of filtering. 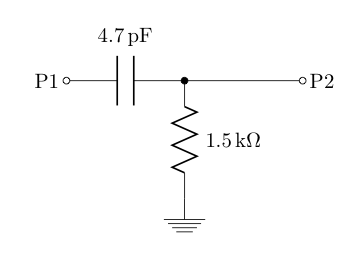 The capacitor will block low-frequency signals and let high-frequency ones through. This kind of circuit is know as a RC circuit, or high-pass filter. We can find its peak frequency in hertz by multiplying its capacitance in farads by its resistance in ohms, multiplying that by two pi, and taking the inverse.

22.6 MHz is far away from the 7 MHz signal we care about, which is good, since it means we’ll get good loss at lower frequencies. But how much loss will we get? Here’s the formula for the transmission loss of a RC circuit.

Taking the base ten logarithm of the loss factor and multiplying by twenty gives us the loss in decibels.

Eighteen decibels of loss is plenty. If we graph the transmission loss equation, we can get a feel for how well it does across the rest of the band. The chart below goes from 1 MHz to 15 MHz.

That doesn’t look very promising for 7 MHz. If we crunch through the numbers, we find a loss of about 11 dB. Remember that three decibels of loss corresponds to a half loss of power. Because decibels is a logarithmic scale, you can convert decibels to a loss multiplier by dividing by ten and raising ten to the power of that result.

Interestingly, this formula explains why -40 dB was chosen as the cut off point for a filter’s stop band. It corresponds to a 10,000 times reduction in power. That’s like taking a 60 watt light bulb and reducing it to the 6 milliwatt smoldering ember on the end of a match stick.

Plugging in 11 for dB, we can figure out how much power we’re going to lose at 7 MHz with the addition of our high-pass filter.

Thirteen times! That seems like a lot. But there’s a side effect to having this capacitor in our filter. In addition to functioning as a high-pass filter, it also functions as a coupling capacitor. It’s going to remove any DC signals we might be getting from the mixer and only let AC signals pass through. That’s good, because our band-pass filter was designed with AC signals in mind.

The chart below shows what happens to our band-pass filter after we add the coupling capacitor to it. It looks very similar to the original band-pass filter plot, just with all the values shifted down. That’s actually another reason to work with transmission loss in decibels instead of volts. You can compute the total transmission loss of a series of chained filters by summing their individual losses in decibels.

Looking at the intersection of the vertical line at 2.8 MHz and the horizontal line at -40 dB, we can see that we’ve pushed our unwanted signal into the stop band. Yay!

There’s just one question left to answer. If we can do all this mathematical analysis, solving for losses at specific frequencies, why does the NorCal 40A include a 50 pF variable capacitor in its band-pass filter design? Why not just crunch the numbers and make it a fixed value?

All the math is wrong!

It turns out that none of this math models reality at all. It’s all based on idealized circuits. When you buy a capacitor, even though it says 100 pF on it, it’s not actually 100 pF. There’s some tolerance level. It might be 100 pF plus or minus 10%. That means it’s really got a range of 90 pF to 110 pF.

When I first read that I was pretty shocked. What do you mean you dropped 14 uF of capacitance? This is electronics. It’s a practical application of physics. It’s science! You can’t just go swapping values in and out and hoping you arrive at something similar.

But as it turns out, you can. And you must. Because math is exact and the real world is not. For example, take a look at the inductor I wound for the transmit filter. 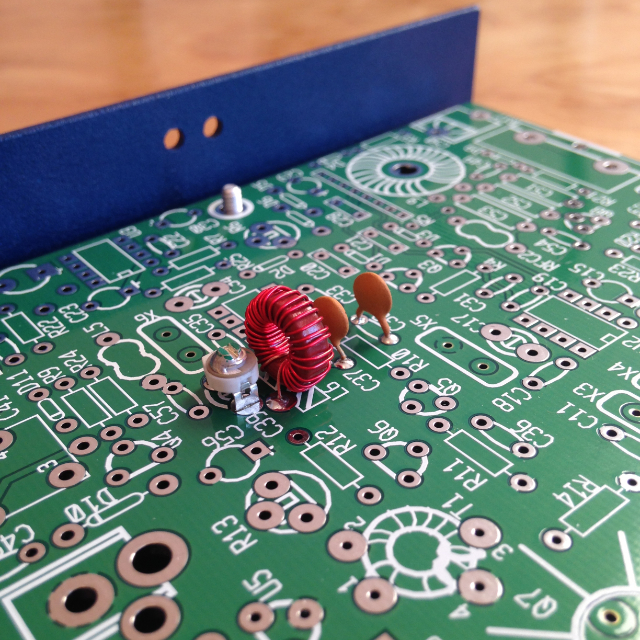 But it’s not really 3.14 uH, because the math still assumes that the turns are spaced evenly and the wire lies flat against the core. Looking at the picture again, you can see that’s not the case. I used the chopstick trick by Jim Bullington, W6BUL, to wind that toroid, and I still ended up having to wind and rewind it several times before I was happy with the result.

The chart below is the band-pass filter for the NorCal 40A, but this time all the part tolerances have been taken into consideration. You can use the sliders below the chart to push the values around and watch the plot change.

There’s a reference plot in gray representing the behavior of the band-pass filter with exact ideal values. Notice that you can push C38 and L6 all the way to the left and there’s still enough swing in C39 to bring the filter’s behavior back in line with the ideal. Likewise if you push them all the way to the right, you’ve got enough variability to correct for that too.

So even though we can’t model reality exactly with math, we can model it well enough to get a feel for the behavior of a circuit. We can use it to predict new behavior relative to existing behavior when we add new components or substitute in new values. And we can use it get a deeper understanding of how a radio does what it does.

Finally, here’s one more shot of the assembled transmit filter. I really like how the light caught the bottom edge of the case and highlighted the bumpy metal texture. 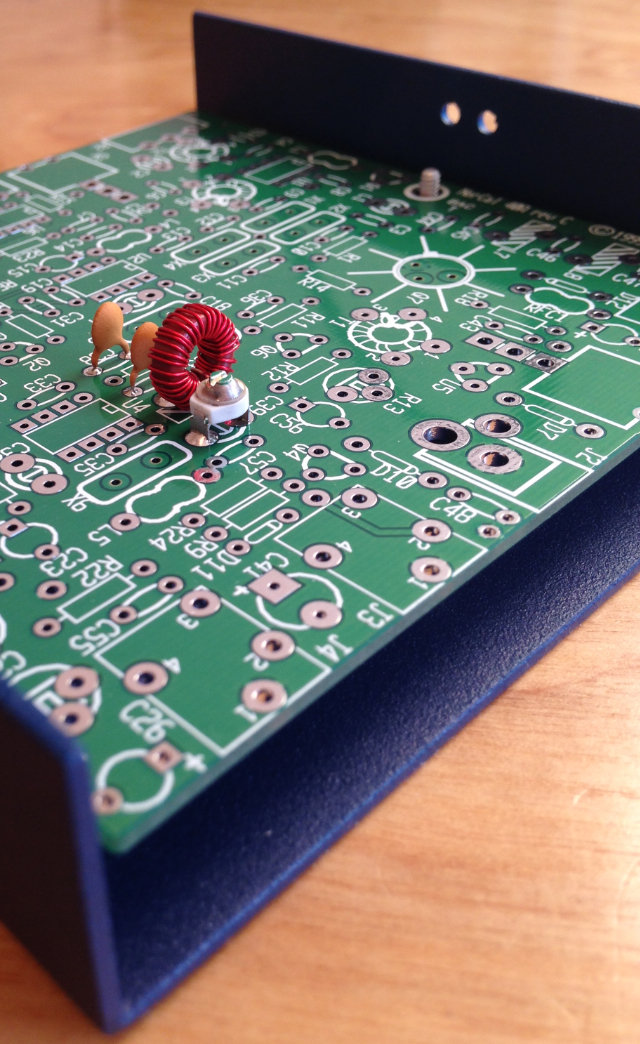 Where we go from here

This is the second part in a multi-part series about building the NorCal 40A transceiver. Links to the other parts are below.

For the curious, photos where taken with an iPhone 5, cropped and resized with Acorn, and compressed with ImageOptim. Schematics where drawn with circuitikz and graphs where created with D3.